You could say it was Victoria Jackon’s Grandfather who influenced her business. When it came to keeping her & her brother entertained on long car journeys he was a whizz at devising fun entertainment packs. At the beginning of every journey, he’d give them a pack with things to look out for – things that were happening on the route. The first one was always the Unigate Diary that was on the flyover on the way out of London – so the first thing they had to spot were the Unigate concrete cows! Once they’d spotted those, he’s give them the next envelope, or get them to open the next clue & send them on their next spotting mission. It was a welcome bit of entertainment, which got them through the journeys & kept them happy along the way.

In many ways, it’s the ethos & approach that Victoria has adopted when it comes to her business, SeeingSticks – which takes children on an art adventure. They provide art & craft packs with a difference, for 4- 11 year olds. It’s all about engaging with children and getting them to look at the world around them. 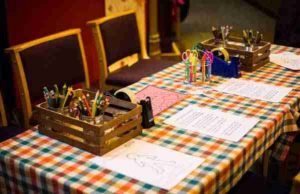 SeeingSticks is so named as ‘SeeingSticks’ are all the implements that allow children to draw what they see – chalks, pastels, paint brushes, crayons – they are all part of our ‘Seeing Sticks’.

I once had a friend whose Dad called a pencil his ‘thinking stick’ – it’s exactly the same principle that I love for children, we see, we draw, we think, we engage.

As a mum of two young children, Victoria found art packs are more a case of ‘following instructions’ & staying in the lines – rather than looking out of the window, which is a huge part of creativity. Although there are huge amounts of arts & craft packs on the market for children, none seemed to offer an interactive element & so SeeingSticks was born. 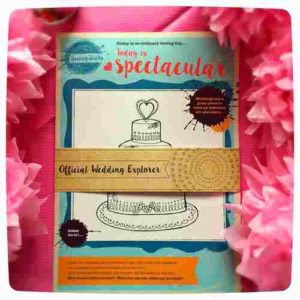 We recently got married & as we’re at a point in our life where every one (including ourselves) had children, we decided to invite children as well. Which is no mean feet when there are 40 children at a wedding! It was important there was something to keep the children entertained & part of the day, rather than ‘silenced in the corner with a pack of pencils’. SeeingSticks provided a crafty helping hand. Every child was given an ‘official wedding explorer pack’, with fab questions like ‘what traditions did you like’, ‘what did you wear’ & included activities like ‘when you hear music, dance a pencil over this space, make it move to the music’.

Not only that, it was in keeping with the day for the adults to get involved on the art adventure too – so SeeingSticks provided postcards for both grown ups & children to draw or write down their favourite memory & pop it in a jam jar at the end of the day. As both a mum & the bride, it was a real joy to see so many people interacting & jotting down memories, as a fun keepsake. By far, my favourite jam jar memory was a the tale of a little boy who listened carefully to his Dad, as he explained it was the part in the service when they would pray & that prayer is a time to wish for nice things for your family. So he dutifully held out his hands & wished for more biscuits! 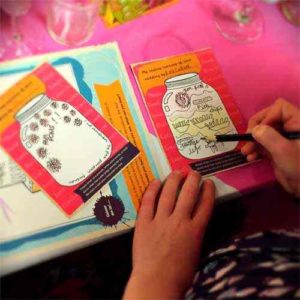 It’s moments like this that SeeingSticks allows you to capture & hold. To see the world in a fun & different way & allow children to harness it.

Their graphics are all hand drawn & written, which have a lovely personal touch to them. You can’t but help think Victoria’s Grandad would be rather proud, to see the SeeingSticks world that he’s help create today.