Every successful individual knows that his or her achievement depends on a community of persons working together.

Where it all began

When she first set up the Freelance Mum podcast and blog in June 2013, broadcaster Faye Dicker had no idea where it would lead her. With a one-year-old baby in the mix, she simply had a desire to connect with other freelance parents and provide a platform to encourage and support them.

She soon realised that wasn’t enough – she wanted to meet up with other freelance mums face-to-face as well as helping them tell their stories online. Her second daughter was just 11 weeks old when Faye led a group of 15 women and their little ones on a facilitated netwalk around Bristol’s Harbourside in July 2014. It was a huge success… and so Freelance Mum born.

Until 2020 Freelance Mum ran twice monthly meetings in Bristol, based at Windmill Hill City Farm and St Paul’s Church in Bedminter, with their signature netwalk at every meeting. But it wasn’t until Covid-19, that Faye pivoted and found a scalable model, which was able to serve Freelance Mums wherever they lived!

With the announcement of lockdown in March 2020 and no longer able to meet in person, the online coffee morning was launched. The weekly meeting every Wednesday at 10:30am, proved such a success, that it was clear it needed to stay.

And as the world began to reopen and people could meet in person, the netwalks were re-introduced. It quickly became apparent that ‘meeting rooms’ were no longer needed to start the netwalks from. And with a new streamlined model, Freelance Mum hubs could be launched across the country. With the beauty of everyone coming together, to still meet at the weekly coffee morning, from wherever they lived.

The first hub was launched in Winchester, when Katie Morrisey replied to a blog post ‘We believe in Fairies’ , looking for fellow FMs to head up hubs across the country. Katie had attended Freelance Mum in Bristol a couple of years previously, before moving to Winchester. She was looking to form a new network and this looked like the perfect model!

Jennifer Jones attended the first Winchester netwalk in June 2021 and liked it so much, she set up a hub in Southampton. In a short space of time, Freelance Mum, went from one hub in Bristol, to netwalks all over the country. And the rest, as they say, is history.

Today Faye has been recognised for her work with Freelance Mum and been listed as one of 100 most influential women in the west in both 2018 and 2019. In 2018 she won Freelance Ambassador of the year award and in 2021 she won IPSE Covid-19 Success Story Award. Faye continues to champion the way for fellow mums in business and create an inclusive, safe space, for them to connect and build a network. Not bad for a mum, on a mission, while bringing up two human beings.

Netwalks that place once a month in every hub. Each hub is headed up by a ‘Freelance Mum Fairy’, who is the local Freelance Mum hub leader, for the area.

They all follow the same format, so they all ‘look & feel’ like Freelance Mum, whilst having their own distinct features. For example, North Somerset has the beauty of setting off at Clevedon Marine Lake, whist Winchester takes in some riverside views. All of them are stunning and all of them are child-friendly.

Each event kicks off with an ice breaker, to get to the know the group. There are focus questions throughout the netwalk, to help keep conversations structured and maximise connections. There’s always an opportunity to grab a coffee (and cake!) and spend some time thrashing out ideas on an activity, before rounding off the meeting.

You can attend as many netwalks as you want and visit hubs across the country – so you can keep building your network.

And if you can’t make a netwalk, don’t worry – there’s still the weekly online coffee morning, that takes place every Wednesday. So you can keep yourself charged and fill your cup for your weekly ‘FM Fix’!

Not to mention, there’s the daily support, chat and focus questions, in our buzzing Facebook Group, The Mothership.

If you’re new and you want to try out Freelance Mum, you can attend for one month absolutely free. That includes as many netwalks as you can attend, our online coffee morning and access to The Mothership.

When you decide to join up (and we think it will be when rather than if!) there is just one simple monthly payment of £15 per month which covers everything, plus a one off £30 sign up fee. We’ll get you set up on Go Cardless, send out your coffee cup and the rest is simple.

“Faye’s Freelance Mum social distanced ‘netwalk’ event in Ashton Court was a breath of fresh air in more ways than one. She facilitates a focused, friendly, unfussy networking style that connects you to likeminded business mums to share knowledge, ideas and inspiration. I always leave a Freelance Mum session refreshed inspired and having learnt something new that I can use to develop my business.”

“In the months that I have been attending I feel I have built a firm network of some brilliant go to people and every session leaves me feeling inspired, supported and motivated. It’s like us each having our own group of cheerleaders egging us on!”

“Faye’s idea for a networking event WITH your children is pure genius and she executes them perfectly. Every event is enjoyable and beneficial on both a personal and a business level”

“I absolutely love the networking events that Freelance Mum runs. I’ve met so many inspiring women (and mothers), eaten delicious cake and listened to wonderful key note speakers. The walks get me out of the office and into the real world talking about my business with people that know” 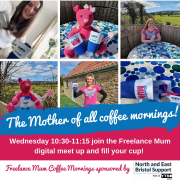 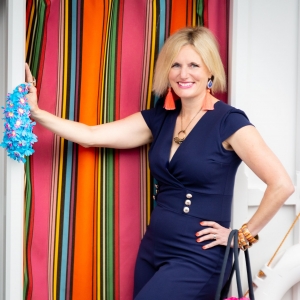 With over 30 years’ experience in the media, broadcasting is in Faye’s DNA – cutting teeth in television at the age of 14.

As a broadcaster and voiceover artist, Faye is a familiar voice across national television and radio campaigns, as well corporate narration and elearning.

When she’s not busy running her businesses (or on the school run!) Faye can often be found swimming in her local lido and Clevedon Marine Lake.

Visit Faye’s website to find out more about her voiceover services.

Find out more about Faye
Scroll to top