Like many parents, sleep is a big topic of conversation in our household – namely the lack of it. It would seem we have not one, but two children, who are both programmed to wake at 5.30am every morning. It’s not funny. No matter how many times we explain ‘you have to stay in bed until your clock goes yellow’, up they leap announcing it’s broken and they want to get up.

That is, until we tried the Tots Up Reward Bus. Knowing I’m the mum of two pre schoolers, a good friend put me onto the bus (so to speak) and it’s spot on. A simple reward chart, that celebrates good behavior in a fab & fun way. A tried and tested concept, with a design that is something special.

It’s the brainchild of Sally Marks – a graphic designer and lecturer in graphic design. The concept was born 15 years ago when she was working for a spell with children on the autistic spectrum. Any good behavior was celebrated, while trying to ignore negative behavior. Not surprisingly reward charts played a large part in things & she quickly designed a basic paper bus, which allowed them to chart their success.

The bus didn’t make an emergence again until several years later, when she was potty training her own son. She went back into her files and dug out the paper bus, stuck it to the fridge with the passengers, who in turn were stuck on to the bus with blu tack, every time a reward was needed. It was a friend who noticed it & asked if she could have one to use in her house, which sparked the idea – if other people liked the bus, was she onto something?

So last year, Sally began a start-up course for businesses & the Tots Up Reward Bus was born. She’s worked closely with an educational psychologist who agreed the reason the bus is so successful, is because it’s so simple – it’s very easy for the child to understand what they are working for & what they have to do to get it. Speaking as a mum, it looks just striking too & is very engaging for children. Our bus gets several comments as visitors see it sitting on the kitchen worktop. For me, the proof is in the pudding. Not only is it a hit at home, but when Jemima & Suki had a sleepover at Nana & Bap Baps, the bus went with them. I received a very excited phone call from Jemima the next day, to tell me she’d got a passenger on the bus. The day there were all 10, was even more exciting! 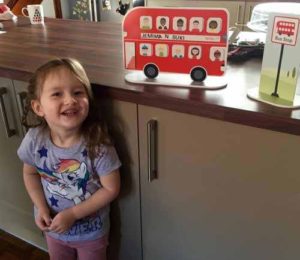 It doesn’t stop there. Sally has recently received crowd funding and has developed an app – so passengers can still be put on the bus, even when you’re out. I’m always intrigued to see which passenger will be chosen, with a huge array of characters to select from. As I write, we’re heading off on holiday in the morning & the bus is coming with us. I won’t pretend we’re not sleep deprived, but with the help of the reward bus, we’re the journey to more 6 am success.

Tots Up Reward Bus retails at £22.95 and can be bought on line from http://www.totsup.co.uk.