When teachers Sophie and Rob, had their first child in 2012, it ear marked a gear change for them in more ways than one. Not only did they now have to juggle family life around teaching, but for Rob, it prompted him to put some ideas into practice. As a secondary school art teacher and with a love of social history, he had often enjoyed teaching his students graffiti lessons. Not just the practice of it – but part of Bristol’s rich social history. Now was the time, to put those ideas into practice and start teaching them as workshops outside of school.

In September 2012, Graft was born – workshops for budding graffiti artists up to Granny and Grandad grafters. From age 8 upwards – if you’ve got an occasion, or just want to try something different, Graft have got it covered.

Workshops are held in The Island, the former Bridewell Street Police Station. It’s an irony appreciated by both Rob & Sophie, that their students are being taught graffiti, in cells former artists had probably been locked up in! Typically workshops last 3 hours, beginning with a mini tour of some of the graffiti around Bristol, before getting hands on and participants having a go themselves. They start with practicing their tag, before trying spray cans on boards, then finally having a go on walls. There’s a lot of white washing involved when it comes to prepping the classes! 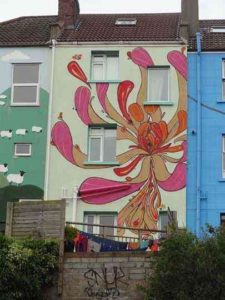 It doesn’t stop there, Rob and Sophie also take commissions for murals – which has seen an incredible uptake. A recent community project in St Paul’s, took its inspiration from patterns used in different cultures, ‘sampled’ from local residents’ crockery, textiles etc. It was spurred on after commission in local people’s homes and gardens, painting murals based on images and designs that they like.

There’s a vibrancy that you can see all over the city, including the whole side of a house in Totterdown, which is jawdropping. It’s hard believe how some one can even conceive an art project that large, let alone practice it!

There’s been a more recent uptake in schools as well, with forest themed murals in primary schools. It’s a theme proving very popular, as increasingly schools are engaging with the natural environment. Projects such as a school playground in Chewton Mendip Primary, include an entire wall, covered in woodland animals – it’s a huge difference from the playtimes that I remember as a child of the 80s. 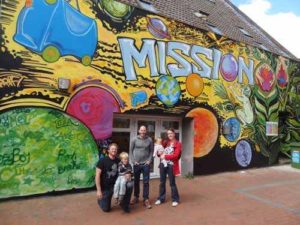 It seems the sky is the limit when it comes to Graft! There is no stopping them – last year they painted canvases for a window display at H&M on behalf of the London School of Fashion, appeared on the BBC’s Home Away From Home programme, giving a graffiti masterclass to their house swappers and even ran a one-to-one workshop for Professor Alice Roberts! Not to mention paint a mural on the Trunki head office in the heart of Bristol as well as continue to run their workshops.

I can’t say as graffiti is something I’ve turned my hand to – or for that matter that my GSCE art classes were half as interesting as Rob’s, but if there was an opportunity to get a group together and try something different, then I’m definitely up for it. My two budding artists have a little way to go before they’re old enough to have a go with a spray can, but I dare say, they’ll be making their mark on the world in no time. Until then, I’ll leave the Graft classes in the safe hands of the experts and we’ll just enjoy taking in their colourful skylines.

The Scent Of A City – Bristol Bluebells
Scroll to top